On my previous assignment I was tasked with building a payment system for a large enterprise. Since it was an enterprise there were a bunch of subsystems to be integrated. One of the subsystem was a SOAP server!!..aaargh!!.

There is no straight forward support for SOAP in play. In a servlets based solution supporting SOAP would be much simpler.

Since we were using play framework 2.5.x as our application framework, we need to make all the SOAP calls to be reactive to get maximum performance out of play framework.

To test the SOAP performance we will use a simple hello world SOAP server. This server has a single method which responds to requests. To monitor the performance better responses are delayed by 5 seconds.

First we need to generate stub classes from the WSDL files with async support. We used wsimport tool with an addition configuration for generating async methods. Following external binding was used.

Save the above binding to async.xml and use below command to generate stub.

In the sample code you can see this has generated one asynchronous method along with other methods.

After the code generation call the methods asynchronously by passing a callback or using lambda functions.

Now we can start using SOAP services in our application. But there is a problem. Are these SOAP calls truly asynchronous?. We can check that from any jvm monitoring tool. Lets use jvisualvm for now. In the sample code provided, we know we are making SOAP call for every HTTP request. So fire few http requests using ab (apache benchmark)

In jvisualvm we can see output similar to the following result. 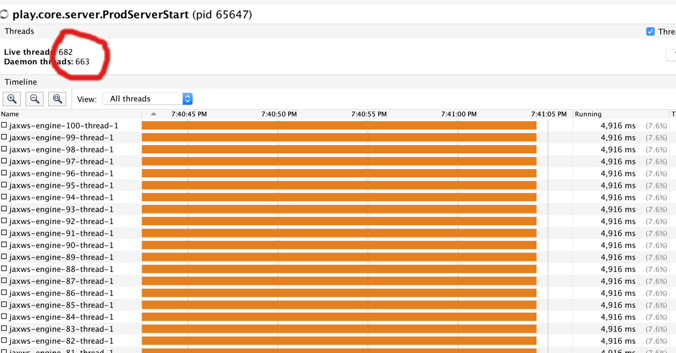 This shows that we are creating one thread per request. And most of the threads are waiting for the SOAP request to complete. This is exactly opposite to what we are trying to achieve. When we invoke SOAP request java internally uses JAX-WS implementation available to JVM. Unfortunately Oracle JRE’s default implementation uses blocking HTTP.

Solution : Use any other JAX-WS implementation which is not blocking in nature. Here we can use Apache Cxf library which has non blocking methods. To use apache cxf in our play application we need to add two dependencies to our build.sbt.

Java will pick apache cxf as its SOAP transport mechanism once its added in the class path. We don't need to make any other code change. Now we can run our apache benchmark against this and monitor the thread result. 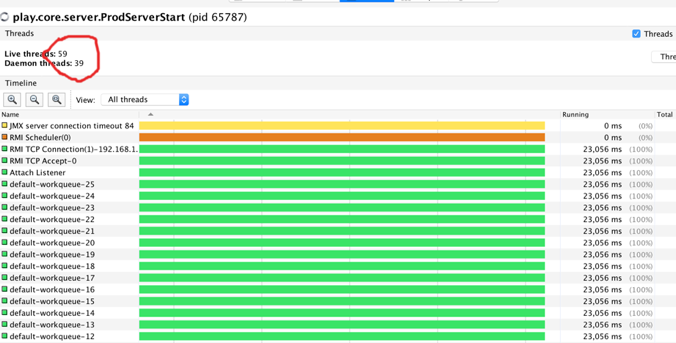 Woha!!. As you can see from the screen the number of live threads have come down to 50 and most of the threads are in running(green) state.

Apache cxf uses http client from Apache HttpComponents which uses event driven I/O model based on Java NIO. That means apache cxc threads, which is making the actual SOAP request over HTTP will not be waiting for the response to come back from server. Once the response is ready from the server, java NIO will invoke the correct thread. This means we will be able to server much larger number of request with minimum threads.

Finally our application is ready for SOAP services. All the SOAP requests are now event driven non-blocking.

For a recent project, I had to integrate AKKA TCP with our REST server built on play framework. We faced and solved many issues while trying to scale the application for high concurrency.